The photograph of the polar bear mother and cubs was honored as a winner at the International “Glanzlichter” Nature Photography Contest 2020. As mentioned earlier, the annual competition is one of the most important and highest regarded European events for nature photographers. In 2020 the jury had received 16937 entries of 919 photographers from 39 countries. 82 photos in 8 different categories were honoured with the image below being one of them, see the official site here. It was my third success at that competition. However, the award ceremony and the entire 3days festival of nature photography sadly had to be cancelled due to the CoVid-19 pandemic. 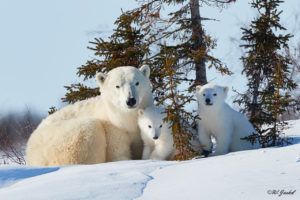 I am honored that two of my photographs were chosen as contribution for an important book, published in 2019 (see cover and the related images above). On 239 pages, the book comprehensively presents the scientific context and consequences of the dramatic changes in the arctic and the particular impact on the polar bears. The author Rinie van Meurs is a known expert for polar bears and has lead hundreds of expeditions in the High Arctic for 30 years, especially around Spitsbergen (Svalbard). I had joined several of these excellent trips, especially focused on polar bears. The pictures of some of those expedition voyages are not edited for galleries on this website yet. The co-author of the book, Louis Beyens, is a biologist and professor emeritus who has specialized in polar ecosystems and the effect of climate change.

The images were captured 2014 in the pack ice of the Russian Arctic north of Franz Josef Land as we encountered a seriously wounded and obviously traumatized female polar bear lying on an ice floe (right image).  At first, we could’t determine the reason until we sailed further and approached the almost completely skeletonized carcass of a yearly polar bear cub (image in the center above). We also spotted a big male in the distance. So it became clear that the female was injured after a hard fight with the male polar bear to defend her cub earlier that day.

The new gallery displays a selection of photographs that had been captured on my voyage to the Falklands, South Georgia and the Antarctic Peninsula in 2015. As usual, you can read the comprehensive description and view the travel maps by opening the drop down menu below the featured gallery image

A selection of photographs captured on a 6 days Humpback Whale Safari was added. This special voyage along Alaska’s Inside Passage was a pretour of my second roundtrip through Alaska and Yukon Territory that took place in 2007 (see the separate gallery and documentation here). As always you can read the description by opening the drop down menu.

A collection of images photographed on two previous trips to Alaska and Yukon Territory was added. Please read the detailed description and additional informations provided by the drop down menu on top of the combined gallery. In 1999 the images still had to be captured on film while digital cameras were used in 2007.

In consequence of the worldwide Covid-19 pandemic and travel restrictions I took the time to browse my film archiv and to digitalize a selection of my slides taken on an amazing trip to the Seychelles Islands 23 years ago when digital photography was not yet introduced. Please read the detailed description that is accessible via the drop down menue and view the gallery here

The gallery displays a selection of photographs that were captured on my recent trip to the Torres del Paine National Park in Chile. Though primarily focused on the elusive puma – also called “Ghost of the Andes” – the gallery also shows other wildlife and birdlife as well as the amazing scenery of the TdP NP. You can read the description and view the gallery here. I had visited Patagonia for the first time in 2010 for photographing the stunning landscape.

In October 2018 I had the unique chance to join the legendary Antarctic expedition to the Emperor Penguins of Snow Hill Island aboard the helicopter- equipped Russian icebreaker “Kapitan Khlebnikov”. It was the first trip for the past 8 years and there a no plans of another expedition for the foreseeable future. Please read the detailed description and browse the selection of photographs of this once-in-a-lifetime experience.

The second photo trip to Costa Rica in April 2018 mainly was focused on the Pacific side of the country while our first visit in 2017 had been concentrated on the central and Caribean parts. The selection of photographs may give another impression of the amazing biodiversity of Costa Rica. For more informations please click on the pulldown menu on top of the gallery.

A new photo gallery was added giving an impression of my voyage along Greenland’s West coast between Upernavik and Ilulissat. For more informations including the itinerary and the details of the dramatic deline of the ice sheet since my first visit of the area in 2002,  please open the pop-up window on the corresponding gallery page. A map of the travel route incl. the key points and a graphic representation of the glacier retreat are added to the description, too .

A selection of photographs of my recent trip to northern Canada was added. The photosafari mainly was focussed on polar bear moms with new born cubs emerging from their dens before spring. Some informations were added, too, describing the difficult conditions to get there and the temperatures in the tundra well below -40°C .

On January 26th an effortful Multimedia show under the title “Fascination of Nature Photography” was displayed in Heidenheim (Germany). The presentation was laid out as a charity event for the benefit of the Rohingya refugees in Bangladesh and took place in the auditorium of the local High School which has a partnership with the St Theresa High school in Bhalukapara. Around 150 excited visitors from all over the region watched the selection of Wolfgang’s photographs and videos on Costa Rica, the Pantanal in Brazil, the orcas and humpback whales of the Peninsula Valdes and Northern Norway combined with photos and timelapse sequences of the Northern Light and background music. The AV presentation was programmed with Wings Platinum 6 Pro and was very successful regarding the charity appeal, too.

A gallery of images showing Japan’s Winter Wildlife and a collection of photographs that may give an impression of Costa Rica’s amazing fauna and flora were added. Some Informations on the trips and locations are included, too.

The well respected German photo magazin “Naturfoto” (issue 4/ 2017) published my photo documentation on the Orcas and the spectacular beach hunting strategy they practice at the peninsula Valdes, Argentina. You can download the article here (German language and moderate quality of the scan, though). For more photos and informations please visit the gallery. 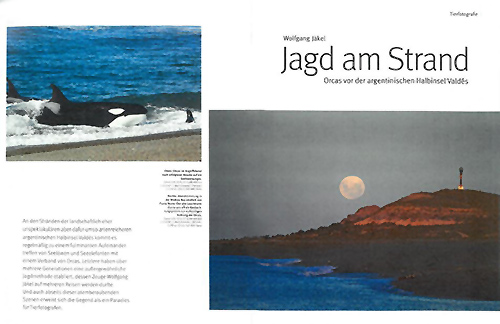 Two of my images have been shortlisted in the final round of the International SIPAcontest 2017 in Siena, Italy. The 2017 edition has received nearly 50000 images from photographers from 130 countries worldwide. The Siena International Photo Award is one of the photo contests with the highest international participation ever.

A gallery and some informations were added. The photographs were taken on an extension trip further to the south in connection to my first visit of the Peninsula Valdes in 2012.

A selection of images of the orcas and other wildlife was added. The photos were captured on 4 trips to Valdes in the period from 2012 to 2016. For more informations about the world-famous hunting behavior of the killer-whales and the area please see the description on the gallery page.

Northern Lights and sceneries in Tromsoe – a gallery was added, displaying a selection of photographs that I had taken on my trips in February 2013 and March 2014.

To the active volcanos and bears of Kamchatka again – a gallery of photographs was added. You can get detailed information of the locations, for the most part including GPS – datas from the images in the gallery.